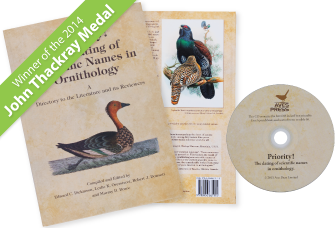 28 greyscale illustrations and 319 pp, plus numerous informative tables of a work-specific nature on an accompanying CD:

In zoology living organisms are give names for global use: Latin being the medium chosen. Carl Linnaeus is credited with introducing binomial nomenclature in which an animal is assigned to a group called a genus and the name of that is taken as its first name and is then identified within that group by its own names – a species name. By convention binomial names date back to 1758 when Linnaeus published the 10th edition of his Systema Naturae. Such names are credited to those who authored them, i.e. described them (not necessarily those that first ‘coined’ the name). The authors are honoured by the perpetuation of their association with the name. Many animals have been given names more than once. By 1842 it was realised that anarchy should be avoided and a principle of priority – thought to have been borrowed from patent law – was introduced so that he who first named an animal retained his right to be honoured.

With zoological discovery taking placing in many countries and involving explorers from many countries almost inevitably some animals were named twice in the same year, perhaps with marginally different characteristics (perhaps seen now as related subspecies). At the same time publication practices were changing.

Because of these two evolutionary developments it can be extremely difficult to precisely date the introduction of a name. This book, based on years of research into the subject, both celebrates the fascinating subject and explains it while providing a considerable accumulation of detail on what past authorities on the subject discovered and what since then has been learned.

“’Priority!’ is a solid testament to the hard labors of its authors in researching the dates of natural history publications in order to resolve difficult issues of priority among bird names. Five years of rigorous bibliographic detective work has resulted in an indispensable reference work for all zoologists.” Neal L. Evenhuis, Entomologist, Bishop Museum, Honolulu, U.S.A.

“Scientific names are used by biologists all over the world as their ‘common language’. These names are vital to communicate clearly and efficiently about the amazing life around us. This book is the result of countless hours of detective work into the dating of publications establishing new scientific names of birds. This task is essential to ascertain the priority of names and hence the correct scientific name to be used as valid today. Although this book focuses on bird literature, the considerable body of historical information given on natural history books and periodicals will be of great interest to all biologists.” Patrice Bouchard, Coleopterist, Canadian National Collection of Insects, Ottawa, Canada.